The late late book review of ‘The Ethics of Liberty’ 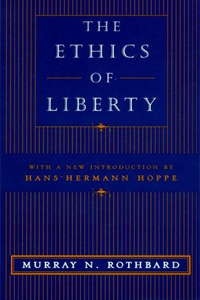 I’ve finally found the last book review I was after, which I wrote for Samizdata.net in 2003. It’s a strange review, discussing a real mélange of Rothbard books, but as I was early into my chrysalis-conversion into a Rothbardian, I’ll forgive myself. I’ll adapt this review in the future, and rewrite separate reviews of all the books mentioned, but for now, here is the late, late book review, with a few modifications to adjust otherwise meaningless time-related references:

As an aspiring student of liberty, I’ve read some books, such as Hayek’s The Constitution of Liberty, which sorted out complex conceptions I’d previously struggled with, and read other books, such as Ayn Rand’s Atlas Shrugged, which just blew my mind straight out of the water. But in my quest for classical liberal enlightenment, over the past five years, I’ve had the occasional good fortune to stumble across a few rare gems which have cracked open both nuts.

These rare and concise works of genius have crystallized my ragged thoughts and exploded them into a dagger-sharpened clarity, to achieve, for me, a double-whammy Wow effect.

You may have enjoyed some of these masterpieces, yourself, such as Hazlitt’s Economics in One Lesson, Hayek’s The Road to Serfdom, and Von Mises’ The Anti-Capitalistic Mentality. I see the world through a far clearer lens, after having read these paradigm shakers, than I ever did before, through an unformed fog of Platonic statism.

Socialists, particularly, hate these books. Because to read them, and to understand them, is to reject socialism’s own evil hate-filled religion. And if we were to let these red Borg force their nauseous European super state upon us, these books would soon get jettisoned onto their mass tribal bonfire. But which one would get tossed on first, in a square, in Berlin? There can only be one. And I think I’ve just read it.

But before I continue, I must state my position as a late late book reviewer.

I find that size matters. I like small books. To me, small is good; small is wonderful; small is beautiful.

Even better than that, I like small books with very small words. So don’t give me no John Stuart Mill; I just can’t hack it. Big books, big words, big turn-off.

But before I come to the main subject of this review, there is a big book, out there, which has to be dealt with first. What is this monumental blockbuster? It’s a Grand Canyon of a book, it’s a Rhodes Colossus of a book, it’s an Incredible Hulk of a book. It is Man, Economy, and State, by Murray N. Rothbard.

This near-thousand page monster just has to be seen to be believed. They had to bring it to the house in a truck; it took three men just to lift it to the door, and we had to strengthen the building’s foundations before we dared risk bringing the beast in.

And then once we’d settled it onto its bookshelf, it sat there for two long years, basking in its own gravitational mass. I’d completed a major quest to stagger up the North Face of Von Mises’s Human Action, and a wise owl had advised that Man, Economy, and State was the next book up. But I just couldn’t face it. Von Mises had worn me out, and the thought of wading through this Hummer-sized doorstopper, proved too great a challenge for one so feeble of mind and body.

However, the name Murray N. Rothbard just kept cropping up again and again. I couldn’t escape it as the next advised port of call, or the mantra that to read any Rothbard you had to start first with this Magnum Opus. So, with a weary heart, I donned the climbing gear, broke out the ice-axe, and attacked this huge book’s forbidding South Face.

But what a joy of leisured utility! Although Rothbard promises you he’s about to cover the whole of economics in one mighty swoop, it’s a breeze. You almost feel you do understand the whole of economics, in one go, as he whisks you from Robinson Crusoe’s island, all the way through to the New York Stock Exchange, via tree berries, grains of gold, and the hideous state-controlled monetary inflation system. I must warn you though; this light-headed feeling of understanding soon passes if you try to explain Rothbard’s axioms to anyone else, without holding the book open at the right page.

This effect makes the book a bit like that gold box, in Pulp Fiction, which Samuel L. Jackson and John Travolta have to recover, at the start of the film. When you open it, you’re happy. When you close it, the book becomes a complete mystery again.

Which brings us to our book review goal; Rothbard’s The Ethics of Liberty. This fabulous book of power, clarity, and near irrefutability, has left me almost numb in admiration. Rothbard starts with a section on natural law, which he builds up, I thought, in a similar way to Leonard Peikoff, with Ayn Rand’s axioms of objectivism. From there, once Rothbard has created his legal platform, he proceeds directly towards his ethics of liberty.

Rothbard works through, amongst many other things, interpersonal relationships, voluntary exchange, property ownership, self defence, children’s rights, human rights, property rights, and contracts. It’s all there. And best of all, for a man like me; it’s all nice and short.

But the best part of the book is its second half; Parts III to V. Here Rothbard explains the immorality of the state, the nature of tax as theft, the inevitable active aggression of the state towards the individual, and the nature of the aristocratic parasites using the state to feed off the rest of us (virtually all Guardian readers, here in the UK).

Rothbard especially covers how the state came into being, how it maintains itself, often by co-opting these self-regarding Guardian-reading intellectuals, and best of all, how he thinks the state can be laid low. He covers this, in the last chapter of the book, Toward a Theory of Strategy for Liberty, in which he deals with the problem of conservative socialism.

He regards it as proper, that libertarians should call for the immediate abolition of the state, however, to achieve this goal, temporary alliances may be necessary with other groups (conservatives, civil rights people, and so on), on specific issues, such as the reduction of taxation, or a particular state regulation. But we must never lose sight of the end game, or stray in any way, along the path towards full liberty. For instance, we should not fight for a tax cutting programme by agreeing that a conservative government should switch from an income tax to a sales tax. The government should just cut the income tax, full stop, and cut its spending accordingly. Rothbard also disbars the use of collectivist methods to achieve our aims, for example, by murdering successful collectivist opponents to liberty.

He also describes Left Sectarianism, where some may decry any link-up with any other group, which does not also call for immediate full-scale liberty. He sees this ultra-sectarianism as non-progressive and futile.

But what I like best about Rothbard is his overwhelming optimism. This book was written in 1982, and even back then he successfully predicted the imminent collapse of aggressive worldwide socialism, which occurred at the end of the 1980s, with the fall of the Berlin wall. He also postulated that a collectivist tyranny could only survive indefinitely inside an agrarian society, and due to capitalistic complexity, and the problem of economic calculation and its interaction with the structure of production, it could never survive indefinitely within a modern industrial society, without that society inevitably breaking down.

The collectivist state will always eat up any economic reserve, created before the collectivist rise of state power; it will then begin to collapse, as soon as it has to pay out all of its current spending needs with all of its current tax receipts. We saw this in the early part of the twentieth century. The laissez-faire nineteenth century capitalists built up an enormous reserve, which the socialists, of the early twentieth century, took several decades to work through.

Once they’d consumed it all, by the 1970s, everything started going horribly pear-shaped. Essentially, the drinks ran out.

We saw this process repeat itself, after the economic triumphs of Reagan and Thatcher. These two conservative cold-war warriors forced the Russian communists to cannibalize themselves to destruction, through containment, and then helped western society build up another capital reserve, by rolling back some of the state. Clinton and Blair then went on to squander all of this, in two long socialist parties, one in the US, albeit tempered by Clinton’s long lame-duck status, and one over here in the UK, which kicked off in 1997.

So here, in the UK after six years of socialism, the drinks ran out again, and the inevitable hangover started with the rise of Gordon Brown. The denizens of the Labour Party still can’t figure it out why New Labour hit the buffers. But with dwindling tax receipts and massive government borrowing, all the dreadful policies of monopoly public service and regulated state franchise ran into the sand, to bring on the inevitable end of the socialist party. Oh dear. How sad. Never mind.

Why won’t these people just accept that socialism doesn’t work? It would be much easier in the long run, for all of us.

All the collectivist variations have now been tried out and they’ve all failed, says Rothbard, so only true freedom is left as a valid option. Let’s all say three big cheers to that, and then thank Mr Rothbard for this magnificent work.

Reading The Ethics of Liberty seemed a bit mad, at first, as Rothbard described a way of life without an overarching state, or even a minarchist one. But the way he describes the nature of a state’s inherent evil, and its overwhelming short-termist incompetence, he made it very hard for me to argue against him.

I thoroughly recommend you run out yourself and buy Man, Economy, and State, and The Ethics of Liberty. Okay, so this review is 21 years too late, but better late than never, especially as both of these books are worth every grain of gold, a monetary commodity which retains its value, even over two decades!

An Austrian Internet Vigilante trying to live Outside the Asylum
View all posts by Andy Duncan →
This entry was posted in Austrian Economics and tagged Ethics of Liberty, Murray Rothbard. Bookmark the permalink.